It seems to me that when we talk about design or “improving” public spaces, there is frequently an accompanying (and mostly unspoken) awareness that certain people are commonly excluded. The poor. People of color. Immigrants. People who are already excluded from so many spheres of daily life. With respect to design of public spaces, they are excluded from the discussion and planning; and ultimately, they will be excluded from the final product. Recent transplants to Oakland, mostly white and affluent, are already changing Oakland’s landscape dramatically. Oakland’s public spaces should not be designed to cater solely to new residents, and ultimately any new public space should be an environment that welcomes Oakland natives. As an example, when I first arrived to San Francisco, a friend who actually grew up in the Mission, took me to Dolores Park. She commented that the recent upgrades to Dolores Park were nice, but the city government hadn’t really taken an interest in Dolores Park until the arrival of affluent white people to the neighborhood. The changes didn’t necessarily make the park a more welcoming place for everyone.

Obviously, people from Oakland want comfortable, inspiring public places to spend their free time. My partner (an Oakland native) frequently reminds me that the problem isn’t that Oakland natives don’t want new spaces, but instead they want cool places to hang out that include them. They want places that they help design. They want places that welcome their presence.

So, I was intrigued, but also skeptical, of this weekend’s Public Design Fair in Frank Ogawa Plaza. The Oakland based non-profit Our City hosted the event. Ten exhibits, all based on the theme “Play,” encouraged Oakland residents to think about the ways we can design and live in public spaces.

To my pleasant surprise, Our City’s definition of, what they call, “public design” is very inclusive:

As evidence of their commitment to the definition, they clearly strived to include multiple different viewpoints in this fair, but from mostly local people. Half of the members of each design team either had to live or work in Oakland, so all of the projects are locally-sourced. Furthermore, the members represented multiple parts of Oakland—7 people from West Oakland, 2 from the Oakland Hills, 4 from East Oakland, 4 from North Oakland, etc.

The theme of the fair, “Play,” was fun, but also so important. We all need places to play! Clearly creating a safe, public space to play is a crucial component of creating a thriving, healthy city. Our City provided this information about the importance of playing:

According to the national nonprofit KaBOOM!, only one in four adolescents get the recommended 60 minutes of physical activity or active play per day, with the number of younger kids only slightly higher. Studies show that access to play is important for mental and physical health, as well as development of critical skills like collaboration, problem-solving, and empathy that youth need to succeed.

So, I had a fun afternoon…playing! I loved how interactive all of the exhibits were. Multiple designers encouraged me to touch the exhibits and physically interact with them. Participants were encouraged to give their feedback. Despite the fact that the projects had been designed and created by someone else, participants took ownership and engaged with them. For example, Block X Block encouraged the public to leave little messages about what they want Oakland to be. It made me stop and think about what I want for the future of Oakland and also to see what was important to others.

I thoroughly enjoyed a discussion at the West Oakland Youth Center Photo Wall. They had created a living room with only two walls that opened away from City Hall to face downtown Oakland. Digital picture frames hung on the walls with selfies taken by the participants. The room was adorned with books, games, and comfy chairs. One of the designers told me that Oakland is all one family and we all essentially live here together. It made Frank Ogawa feel like home, welcoming all of us.

If you have free time on Saturday I would highly recommend stopping by the event and engaging with the designers. Additionally, the lineup at Saturday’s panel is impressive, including Favianna Rodriguez, and people from SPUR, Betti Ono, American Steel Studios, and more.  I’m sure that the conversations will be inspiring and important for the future of Oakland. 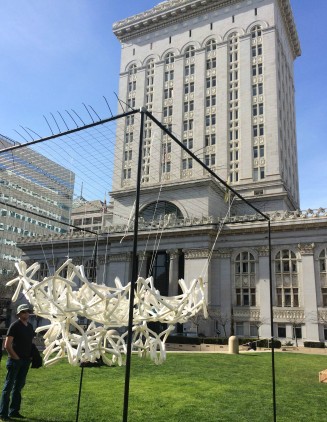 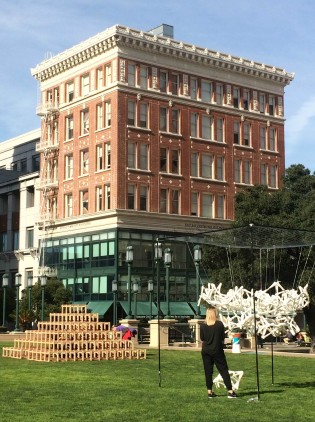